We have previously encountered many videos in which the impossible happened, even though we had previously considered it to be utterly unimaginable. Coming across those videos would be unthinkable if people had not shared these situations on the social media each day. Having the opportunity to take a look at something that has just happened on the other side of the world, while sitting in a comfy chair is amazing. Anyway, we all know that coming very near to a wild animal, especially an angry lion, is very dangerous and the consequences might be devastating. 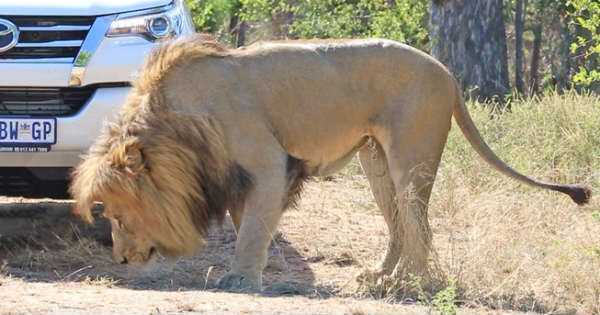 This is exactly what this driver was about to be taught, but luckily nothing serious happened. So what was actually going on? Namely, we take a look at wildlife footage in which the big cat is not kept in captivity, thus it can roam anywhere it likes. It just happened that the lion stood in the middle of this road and so all of the cars had to stop. One of the people there took his camera out to film the king of the jungle. Even though at first it seems like there will be no problems and the lion would simply move away, then all of a sudden the angry lion jumped on and attacked one of the cars there.

Luckily, their window was closed so the lion was unable to hurt anybody. Some of the cars behind them even back up further hence they were afraid that they might be the next victims of this huge lion. What do you think, what was the worst case scenario that might have happened to the people in the Toyota?

Lastly, follow this link to find out more about Germany’s issue with animals, and the problems they cause to cars!