There are a lot of things that go on in the world of racing hence people modify their cars on various ways to make them as good and as fast as they can get. Even though we are not surprised anymore when we see a small car being equipped with a powerful engine hence we have seen many of them so far, what you are going to see in this video is something even better as we take a look at a tight race between a classic Pro-Touring Mustang going head to head on the track with a surprisingly fast Mini. 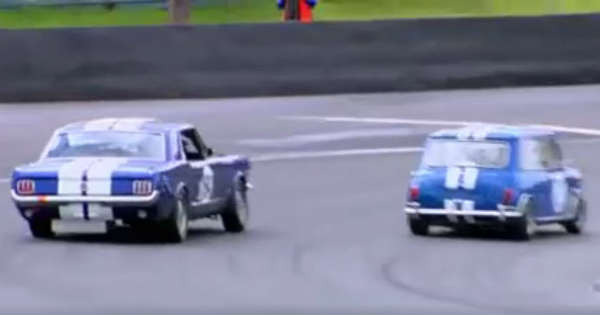 None of us would expect to see such small car keeping in touch with the classic American muscle car that is pure symbol of power and pride. But as the saying goes, size does not really matter hence this fast Mini is one of the best ones we have seen in years. Even though there are other cars on the track involved in the race, it seems that these two cars were way ahead and nothing could stop them.

The blue Mini is most of the time behind the Mustang but after awhile it was time for the small classic car to shine. On one sharp turn due to its size, the powerful Mini managed to overtake the furious Mustang and made the crowd to go wild. Even though we do not get the chance to see the end of the race, it must have been something amazing.