There have been some absolutely amazing cars that some of the world`s most famous car experts have designed over the years, cars which have marked the history in the industry. One of the world`s most famous car designing experts, Chip Foose, took his time to show us everything we need to know about his Mach Foose Mustang, a car that was revealed at this year`s SEMA. We have all heard about his project way before, but it was finally time to see this monster in real life. 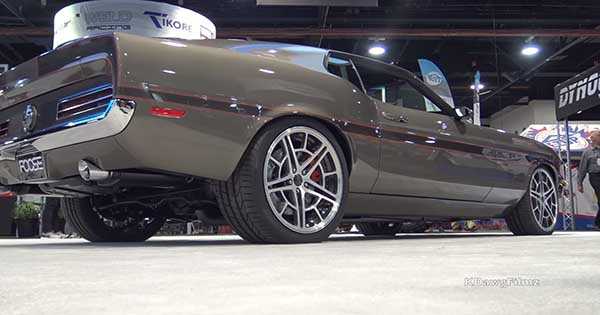 The car itself looks absolutely stunning and it was an absolute challenge to build such Mustang all from scratch. It takes lots of effort and hours of designing to make this car look perfect. The year of production of this Mustang is 1971. Chip Foose took his time to explain the history of how he got the idea and why he actually chose this specific Mustang after all. There have been some changes that have happened to this Mach Foose Mustang to make it look even better and even more furious than it first did.

But once you take a look at the details, you will soon realize that this is in fact a 2011 Ford Mustang GT with a 1971 body and rear panels from 1970. This blends the car`s look to mere perfection and there is not a single flaw on it. What do you think; could this Mach Foose Mustang be the best one that we have seen so far?

However, check out another beast shot at SEMA!