People often think that driving the best looking car and the most expensive one is always paying well off, hence people on the streets stop by to take a photo or video of it. But, there are situations in which things might go wrong, especially if you have such pristine car. Namely, we take a look at a short video and see why it is sometimes better to have a mighty sleeper, rather than a furious beast. We see couples of cars gathered up at a parking lot just besides the buildings, and one man films everything. A mighty sleeper is seen drifting his car down the parking lot, making everyone to go crazy. 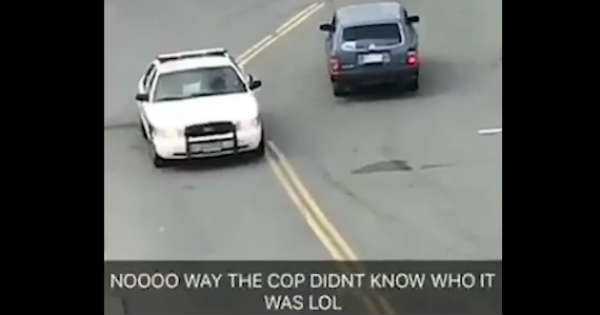 But, while it was drifting and dragging its tires, it produced a loud sound that attracted the attention of a police car. This is where things get weird. At the same moment the police car made the turn towards the parking lot, the mighty sleeper stopped drifting and went on driving forwards in a normal way.

Hence the police car did not expect that such old and rusty car can make that sound, the drove past it and headed over to the people gathered at the parking lot with their mighty cars. Everyone was laughing at this hilarious situation, and with a reason. This is not something you see every day, and it might just be the reason you would want to purchase a sleeper any time soon. What do you think, how powerful that sleeper really is?

And if you want to watch more sleepers burning their tires, follow this link!

The Benefits Of Driving A Sleeper

The cop had no idea 😂 🚔Submitted by Abraham Hostetler