Police officers have strong powers to do their duties. On the other hand, the constitution puts limits on just how far they can go in enforcing the law. However, sometimes they go too far. Many of us, who have been stopped by the police for whatever reason, have experienced some form of police misconduct. What an awesome Police Officer. 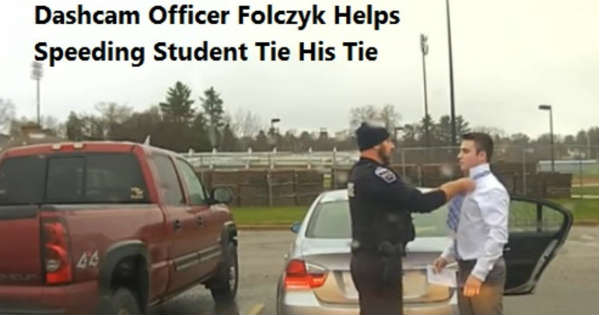 That`s why, the police has a bad reputation in many people`s eyes. Nevertheless, those bad police officers are definitely not the majority, as most of them are working according to laws. There are just those few officers who aren`t doing their job properly and are putting a bad name for the rest of the force. This video with an awesome police officer can attest to the fact that there are very good policemen in the force as well.

The whole video is recorded from a dash cam in the police vehicle. Student from the University of Wisconsin was speeding when a police officer pulled him over. It all happened near campus. The student says that he couldn`t get his tie tied and because of that he is late for a presentation. The awesome police officer then asked the student to bring the tie. He loosely tied the tie around his own neck and handed it back to the student. We definitely didn`t saw that coming! People are mostly showing the bad side of the police force, so it`s good to see the good side for a change as well. Click on the video below and enjoy.

At last, follow this link to watch the funniest arrests that ever happened.