Every rich person on the planet has some sort of an expensive and rare collection. Previously we have seen some amazing videos of famous people and their car collection and hereby this video is something similar. We show you everything you need to know about Austin Russell, better known as Chumlee, and his home and awesome car collection. He became a very famous reality TV star and so his net worth kept growing and growing. Thus he decided in 2012 to purchase a super luxurious house in Las Vegas, Nevada for whooping $1.1 million. We take a birds-eye view from the house and it really does look awesome. 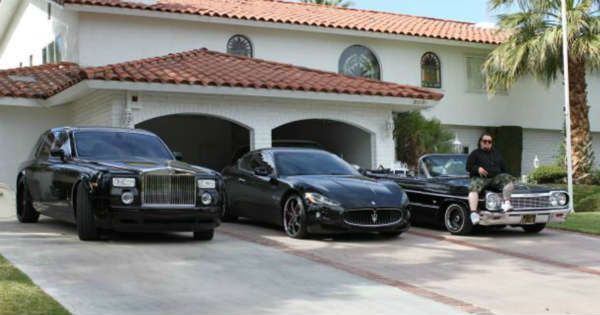 He has his own parking lot and a swimming pool. He was intentionally looking for a house with a big lot so he could keep his cars. First up we check out his expensive Maserati Gran Turismo. There are couples of pictures in which we see Chumlee driving this awesome car. Furthermore we see his awesome black beast, the Rolls Royce. To make things complete and form a mighty trio, we also take a look at his Cadillac Escalade. But the amazing car collection does not stop there.

He also owns a 1964 Impala and a white Range Rover. But probably the one car that is super cool and expensive is the fully restored Lincoln Continental. Chumlee seems to like black cars so most of his cars have that color. What do you think, do you like his amazing house and car collection?

Before you go, behold the impressive vehicle collection of Bill Gates.