Having been through many awesome and many weird videos you must be saying that nothing can surprise you, that is not until you take a look at this fairly unique and one of a kind Audi RS4 Avant B5. But what makes this car so special hence we have seen many such cars previously? Well, it is not the car itself that is so unusual; rather it is the trailer that is attached to the back that is so fuzzy. We have seen many different trailers so far, but nothing can beat this one attached to the Audi RS4 Avant B5, hence it is just another same car just without the front part. 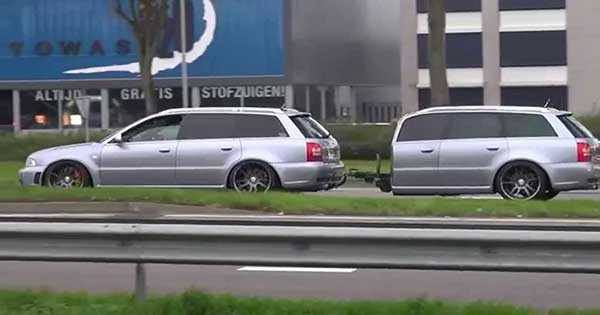 Yes, that is right! The trailer is actually the Audi RS4 but it is missing the front part. We do not have any information about how the owner came up with the idea, we can only be happy that we have experienced such thing. Namely, this man took video of it somewhere on a car meeting in the Netherlands.

The concept is absolutely amazing and who knows, this might just become a trend in the future and seeing a car that has a trailer made from the same model but just without the front might not be so unusual after all. Though we do not get the chance to see how the trailer looks from the inside, we can conclude without a doubt that it indeed looks stunning. What do you think about it?

At last, check out the most unusual and bizarre cars ever produced!