All of the Audi RS range performance cars have developed a great reputation as rocket ships thanks to the German manufacturer`s Quattro AWD system and insanely powerful engines. The super-fast Audi models that are currently on sale ranges from $51,000 which is the RS3 hatchback, then you have the roomy $103,000 RS6 estate and the range-topping R8 two-seat supercar which costs whooping $176,000. Carwow being the great lads they are, the decided to line them up all side-by-side on a runway located at Bruntingthorpe, Lincolnshire. How about this Audi Drag Race. 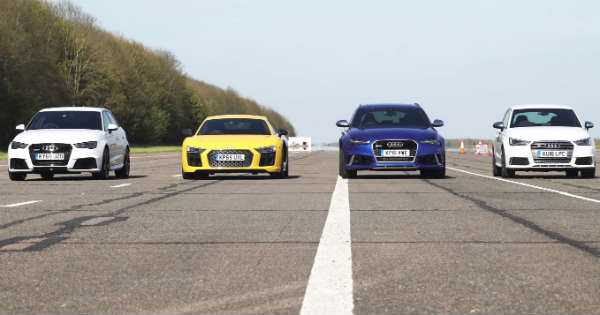 They decided to do this comparison with the purpose of finding out how much the car`s performance increases with spending more money. Just for a giggle, they also decided to include the small-yet-potent Audi S1 which costs a relatively reasonable $32,000. The first race in this Audi RS range drag racing spectacle is between the RS2 and the S1. The S1 managed to snatch the victory by two car lengths which means the RS2 is now outdated. Up next you can see a much bigger race between the RS3 Sportback, the R8 V10 Plus and the S1. This race proves that if you spent $176,000 on an Audi R8 you only enjoy a small straight-line advantage over the RS6 performance.

However, with a bit more runway the Audi R8 would go more than 200 mph, while the RS6 would only be able to hit between 155 and 190 mph. This depends on whether you have purchased the optional speed limiter increase package. Now, the third race is something really special. It`s between the Audi R8 and a Ducati 959. Unsurprisingly, a supercar with an automatic transmission is easier to launch faster in a straight than a bike with manual transmission. Watch this amazing Audi Drag Race.

At last, follow this link to read something more about the diesel V12 Audi R8 concept.