Have you heard about this before? Here are the Aston Martin Vantage parts that are made by other manufacturers! 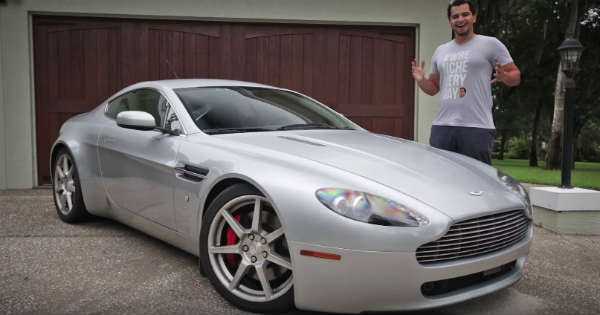 The Aston Martin Vantage that is powered by a powerful V8 engine is definitely still one of the most wanted cars ever made. That`s why the famous YouTuber Tavarish has personally bought this specific Vantage. However, after buying this awesome sportscar and owning it for a year he noticed something pretty interesting that may surprise you. He noticed a couple of parts that the British manufacturer didn`t create. In some cases, Aston Martin even tried to hide that they didn`t made those specific Aston Martin Vantage parts.

Let`s start with the Vantage`s awesome 4.3L V8 engine that sounds awesome. Even though you can find the Aston Martin`s logo everywhere and it even says that it`s hand-built in England by someone named Mick Moten, that`s not really the case.

The design is not 100% Aston Martin because the engine is a derivative of another car – the Jaguar AJ V8. Aston Martin took the foundation of this engine and gave it a new crankshaft, block, pistons, cylinder heads, rods, exhaust manifolds and intake manifolds. Many things were changed, but you got to agree that change doesn`t necessary mean completely different. Elsewhere, you can find many other Aston Martin Vantage parts not created by the British manufacturer but created by Ford and Volvo.

Back in the days, Ford owned Aston Martin but they also owned Volvo so that`s why you can find many quirky Swedish parts in the interior by Volvo and many other Ford parts elsewhere. Check out the video below and see for yourself, Tavarish gives us a pretty neat rundown.

At last, check out the all-gold Aston Martin model.