Check out this kid with a 50cc Bike hits an amazing 70 Foot Triple JUMP! 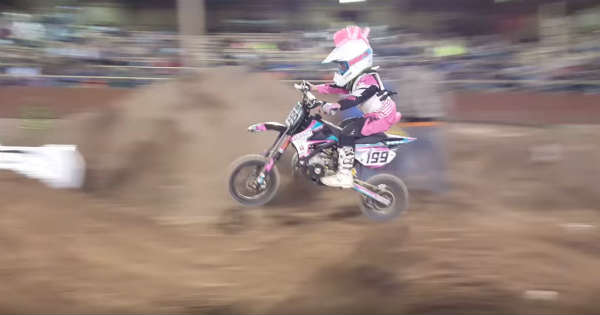 Yes, it’s all about starting them young. This kid could be the next big motocross star as his is already slinging his opponents and hitting some serious big jumps. We already know that his name is Gannon Lawson and he is riding his 50cc Cobra bike at the 2016 Pikes Peak Supercross near the Colorado Springs, US. We don’t know his age but he is obviously very talented as he made this jump with a very small engine on his bike.

His performance started with several warm-up laps, then he made his run at the 70 Foot big triple jump that looks very impressive. Little Gannon cranks the full throttle on his bike and took him self to the sky from the ramp and made an amazing jump that lasted for several seconds.

However, the landing was not perfect, but it looked like it was performed by a Pro who has done it thousands of times. This kid actually handles this very difficult jump pretty well.

So, what do you think about this amazing jump? Are you sending props to his parents for letting their kid to try doing big things even knowing there is a risk of injury? What would you do if you had a chance to do this for your child?