We are sure that nowhere on this planet exists a man who can resist an epic Mopar. Who wouldn`t like to own such a beast? Brent Farrell had that dream. He was searching for that ideal car for almost two years, when he stumped upon a blog of this project-ready Charger. He knew that he got to have it! The Charger has a modified 2005 Viper V10 engine inside its arrow-straight, stock-looking `69 Charger body. Underneath is a hand-fabricated steel-tube frame, so it doesn`t get twisted up.

Then Brent decided to meet with the owner…When he took a first look at it, he thought to himself that he must have been a lucky man to own such a car! 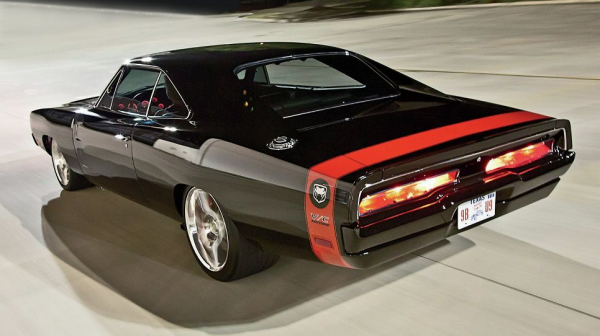 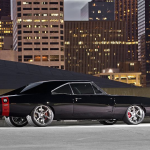 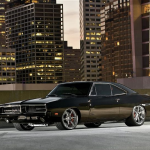 This car`s engine was built by Dick Vandezelden and it’s a  2005 Gen III V10 Viper . The pistons are from CP and the rods are from Oliver. He also featured an air intake, exhausts coated by Jet-Hot, headers from stainless steel and a fabricated oil pan. The Viper V10 engine, boosting 605 horses has been carefully built with every part, bolt and nut added.

The transmission is also from the `05 Viper: a Tremec T-56 six-speed manual.

Ricky Rods  was in charge of customizing the interior. He fitted gauges from AM, steering wheel from Billet Specialties, front buckets from Dodge Neon,  navigation and sound system from Panasonic, headliner, leather  and tweed upholstery, kickpanels, door, floorboards, split seats at the rear end as well as the side.

Xtreme Innovations and Fabrications were also in charge of the exterior. They fabricated the fuel cell, the floors and the trunk pan by hand. The guys also extended the wheel base for 2 inches, fitted a tube frame made of steel, sizing 2×3 inches, shaved the bumpers and finally laid the PPG black paint on the clearcoat and on the base.