This 1958 Scammell Constructor obviously needs some serious work done, but it has huge potential nevertheless. For those who never encountered the name Scammell, it is a British truck manufacturer that produced many beasty vehicles from 1921 to its unfortunate end in 1988. Scammell is a manufacturer that is mainly specialized in building powerful military off-road vehicles. This company also has a huge history before deciding to build trucks in 1921.  They started as a coach and wheelwright-building business in the late-Victorian period. 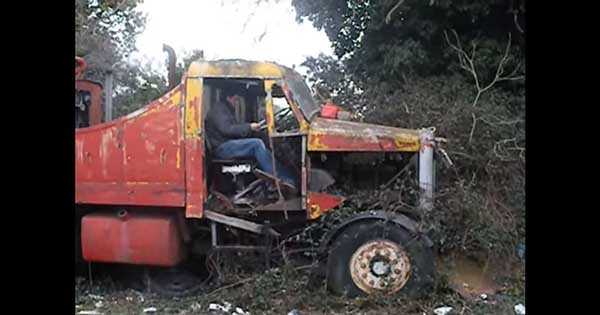 However, they go in history as one of the pioneers in building military vehicles and they used to operate from Watford, England. We always have a soft spot for old vehicles being neglected and we are more than happy that someone decided to revive this beauty.

The 1958 Scammell Constructor found in the video is in a very bad shape being neglected for many years. As you can see Nature has taken its tool and the entire truck is overgrown by weeds and moss. Nevertheless, a bunch of enthusiasts have noticed that this truck still has a lot of potential and they try to revive it by starting its engine after so many years being neglected by Mother Nature. After seeing in what shape this truck is, you will be completely amazed when the engine starts rumbling. It`s really amazing how all the parts in the engine still works after so many years being exposed to the elements. This is proof how strong those old school machines actually were. We hope to see a full restoration video next!

At last, howstuffworks give you 5 tips for starting an old engine!