If ever going to the UK, maybe you will find useful to know that Rat is very famous car there. The Rat we are going to talk about is a `57 Chevy that is now modified. But, if you compare the looks of this vehicle in Custom Car Magazine in 1978 and today, you will notice no difference. The current owner of this 1957 Chevy, Ken, says that he drives his car on the road because before that the car had only been used for racing that normally exhausted the vehicle and its potential.

Certainly, in order for the car to roll on the streets some changes had to be introduced. According to Ken these changes are only part of the evolution of the vehicle. Besides the new 461ci V8 big block engine and the roll cage, not many other things have been added or removed from the vehicle. With its 3500lbs, which is nearly the standard weight of a Chevy, Ken says that he does not have difficulties driving this car which actually is very fun experience. Believe it or not, the suspension is one of the things that are not changed in this vehicle. Yeah, it was made at the end of the 1970s and yeah, it does function extremely well. Therefore, Ken says that he does not want to change a lot of things in the car and it will remain as original as possible.

Furthermore, Ken expresses his gratitude to Martin Slater for the efforts he made the 1957 Chevy to look as it looks right now. And some time ago, when Ken first met Martin, Martin signed the car`s dash for Ken. Pretty cool, right?!

What we could understand form our visit is that Ken really cares about this Roarin` Rat. He is even part of a club called Low Flyers that is related to hot rods ad that is quite respected in the UK. In the mid `80s the members of this club got together and rode some cheap hot rods. Ken says that he still keeps his `32 Ford Coupe from back then and that this vehicle is very dear to his heart. Today, the club may not be that numerous, but some guys among which Ken, remained faithful to the concept and the idea of the club. We really admire Ken`s enthusiasm and Chevy`s resistance to aging. 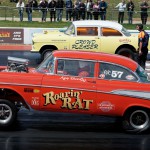 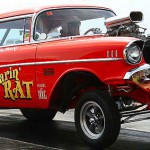 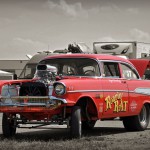 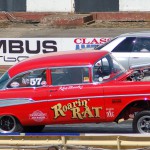 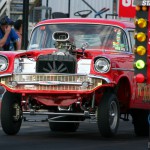