You would presume that you are pretty safe at your house, but as this unreal footage shows, it`s never stupid to be too careful. A woman from Johannesburg has shared some pretty shocking CCTV footage that shows three criminals trying to hijack herself and her husband after returning home. The name of the woman is Anelle Hills and she posted this footage on Facebook. After being released on social media, this video went completely viral garnering huge attention around the world. 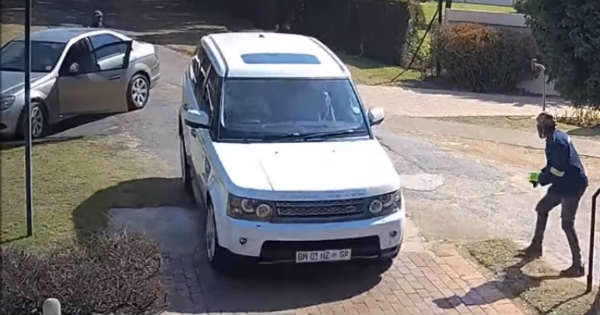 You can see three men in what looks a Mercedes Benz Gold C-Class pulling up to their victim`s driveway in order to hijack their Range Rover. You can see the woman getting out the vehicle in order to pick up her dog that left the house. Afterwards, she quickly notices the one hijacker running towards her with a fire weapon in his hand. The woman then panic-stricken quickly jumps back in the vehicle and her husband quickly reverses down the street at full speed. He almost bumped one of the criminals in the process. We got to salute this couple`s quick-thinking because that`s exactly what saved them from these pesky hijackers.

Up next, you can see the hijackers hastily running back to their Mercedes and speeding down the road. They reported the incident to the Johannesburg Police but according to the couple the police didn`t open a case. However, we hope that justice at the end will prevail and the criminals will be arrested before trying to do something like this again. Watch the unreal footage below.

Lastly, follow this link to see how four BMWs were hijacked in just 100 seconds!