Drifting is really popular in Japan. It is a driving technique where a driver oversteers his car on purpose, which results in losing traction in the wheels (sometimes only in the rear wheels, sometimes all four tires lose traction). By doing this, the driver can make really nice looking turns, where the car seems like it is completely out of control! In fact, drifting is so popular, the Japanese even have a drifting championship that`s known as the D1 Grand Prix! A drift battle is also a popular way for to drifters to show which one is better! 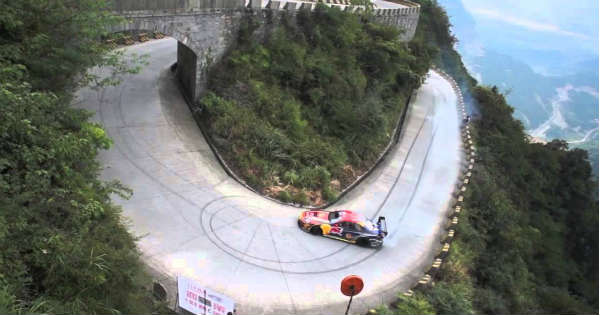 This is exactly what we have in store for you guys today! Check out this amazing full version video called DRIFT KING BATTLE! It was recorded on the Tianmenshan Mountain, on one of the best roads for drifting in Japan!

The road where the drift battle is taking place looks like it was made just for this epic race! A 7 mile long mountainous road with breathtaking surroundings is where this footage was recorded. Red Bull knew precisely which location to pick as the perfect place for an awesome drift battle!

These 2 drivers were chosen by Red Bull to take this amazing ride on these curvy roads! In our taste, this is one of the best drift performances we have ever seen out of track! It is too bad the camera angle doesn`t show too much! We think they could have made it much, much better! Nevertheless the driving skills of these guys are something you don`t want to miss.

This awesome video has some nice music too! Be sure to check out this amazing drift battle, as it is something that any race enthusiast would love. These guys are just that good! Oh, and, can someone name the music please?

Finally, if you want to find out more about the Tianmen Mountain, click here!