What we have here is funny but `educational` video for everyone who ever thought about starting a fight with a guy with a mega truck over a banal thing like parking lot space. If you do not want those enormous tires to end up squashing your new car that mummy bought it for your birthday, you should not do some foolishness like the guy in the video, or you might feel the Lifted Truck Rage! 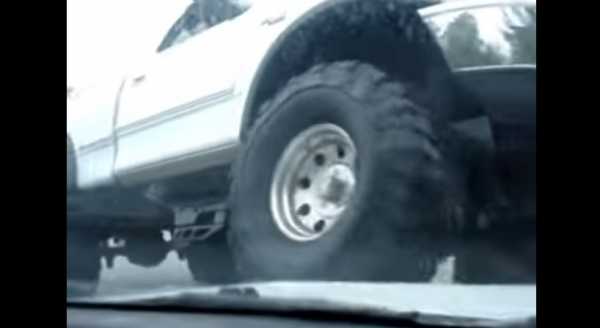 Fighting over a parking lot space has never been a smart thing to do. Although it`s a “manly” thing to do, we always oppose it. Nothing good has ever come from it nor will it ever. You could also get in huge trouble! Especially if it`s a case like this one, and you are in a beef with a lifted truck that can squash you like a bug! That means, you better stay out of the fight and do not challenge the patience of the driver in the lifted truck by acting obscenely, cursing and swearing at him. Think about it!

His vehicle is about three feet higher than yours, the engine is probably two or three times more powerful, so it is clear that you are in disadvantage from the very beginning. Plus, you never know who might be behind the wheel of that monster!

Our `hero` in the video obviously did not thought about those things, so he started a verbal fight with the guy in the lifted truck and finally ended up being ran over. Afterwards, it is simply too late for crying and complaining. So, have fun watching the video and remember not to make such a mistake yourself. Of course, we do not exclude the fact that there is a lot of fishy stuff with the credibility of this video, but it is fun anyway!

Finally, if you want to remind yourselves about the best trucks at SEMA 2013, follow this link!