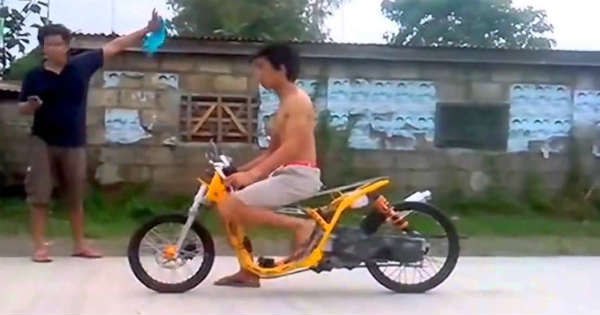 Safety is probably not something this guy practices when he rides his bike. Even though his powerful scooter is small, that 10.98ci engine is a very potent machine! Apparently, it has been modified for drag racing by a team from Penaranda, so it`s no wonder it has an incredible start!

Fortunately, this fellow is not going that drastic, at least not in this video as he remains alive, but just from watching him in the clip with this tiny, but highly modified yellow scooter (I guess, for some parts of the world, this is equal to CBR 1000) with his flip-flops, or sandals, or whatever, preparing himself for a launch on the `drag strip` and then doing a wheelie is intense! Well, just take a look for yourself. We just hope he is still alive and we can see him doing some other stunts. This video just shows how different riding a bike is throughout the world! If this happened in the US, he would have been strapped from head to toe with protective gear! However, this was filmed in the Philippines, and their safety rules are different! If you have a powerful scooter on your disposal, then all you have to do is take off your shirt!

Lastly, follow this link to watch a police officer in a street drag race!