Have you ever seen a car on 32 INCH RIMS? 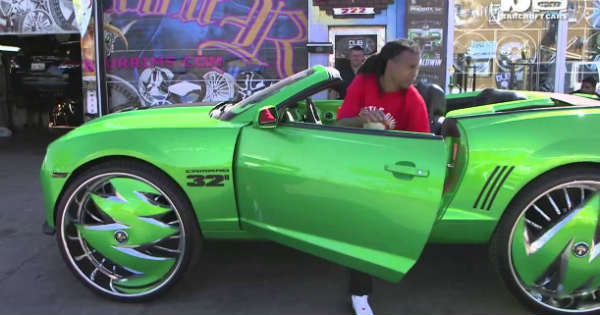 People`s desire for creating an original ride that will stand out wherever it may appear, combined with one`s `unlimited` imagination, can really result with something that you will not even believe your eyes. And the example that you are going to see in the following video that we have prepared for you today, is most definitely something that can be placed high on anyone`s list of unique and original rides. If you ask me, this is the most crazy looking Chevy Camaro that I have ever seen!

And the man behind this car is 32 year old Corey Jones from Illinois, who has been a professional builder of custom cars for the last seven years. Starting from the age of seventeen, he has owned more than ten custom built vehicles, but he considers this green Chevy Camaro the top of his work.

As you could have seen on the intro photo, this green Camaro is really something that makes heads turn, mostly because of the huge wheels and color. It is not an off-road car with heavy-duty suspension (as one may think at first), but a `regular` Chevy Camaro fitted with 32-inch rims, which comes about twice as big as a regular set of wheels.

But I really think that every comment about this ultimate ghetto ride is redundant, so just watch the video and see it for yourself. And if you want to see more weird custom built cars, go to this link.