There are no limits when it comes to modifying your ride. The possibilities just keep on coming and there are tons of things you can test out to make your car look much better, or perform much faster. Even though there are some modifications that we can say that are cool, there are some which are absolutely stunning and will blow your mind. Hereby, we take a look at what could possibly be the weirdest and bizarre Volvo that you have ever seen. When we are talking about extreme modifications, this is the one we have in mind. 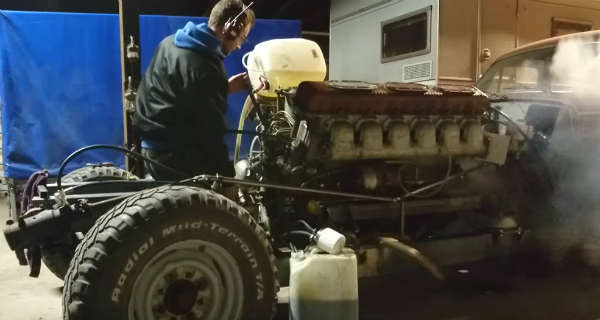 This glorious 1960 Volvo PV544 was made by the Swedish man named Victor Jonsson and it has something that will absolutely blow your mind. We present you the Holy Grail when it comes to engines! This monstrous Volvo has a whooping 38.8L V12 diesel engine and it was taken out from a war museum. Yes, this engine was once used to power a Brobandvagn 971, which is actually a Swedish bridge launching military vehicle.

This guy decided to finally put the massive engine in use once again, thus creating something that looks absolutely stunning.  The V-5, which is the actual name of the engine, not the valves, can produce 530 HP and run at massive 6,000 RPM, something unusual for a diesel engine. Moreover, we even get the chance to see the weirdest Volvo ever in action and it sounds absolutely frightening.

What do you think about this Bizarre Volvo?