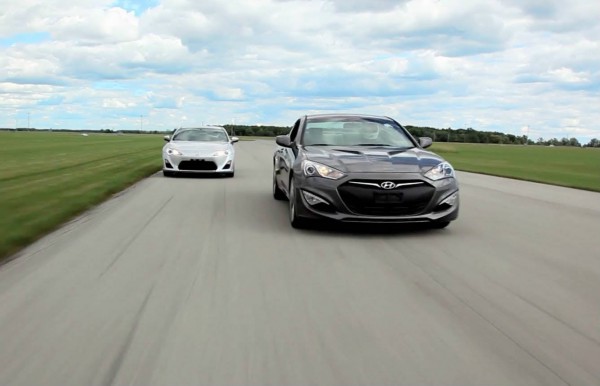 Finding a cheap, sporty coupe, particularly if coming from other continents was extremely difficult.  But, that`s ancient history now! For this we are extremely grateful to Hyundai and 2013 Scion for their initiative to manufacture cheap and sporty coupes that everybody could afford.

The Genesis Coupe models have a starting price of 24,250 dollars while the price of the R-Spec is 26,500 dollars. The Genesis Coupe 2.0T R-spec and FR-S are made for drivers who are into this kind of ride and are equipped with 2.0 four-cylinder engines. With this type of engines the car offers economic and comfortable ride. Hyundai Genesis Coupe develops 274 horsepower and 275 lb-ft of torque due to its greater intercooler and turbocharger. The R-Spec model is equipped with 4-piston Brembo brakes, revised suspension tuning, summer tires and a Torsion limited slip differential.

With every new product launched on the market, Hyundai is offering high-quality and better models, The Hyundai 2.0T coupe introduced in 2010 was very likable and customers accepted it quite well. Now, there is a new 2013 Hyundai coupe which is upgraded compared to its 2010 sibling. If we compare the two models we will see that the 2013 coupe model has additional 52 lb-ft of torque, the 2010 model has 223 while, the 2013 model has 275. The 2013 Hyundai coupe develops 274 hp which is 75 hp more than the 2010 version. Additionally, the 2013 model has a 2.0 liter turbocharged engine.

2013 Scion FR-S has a flat 2.0 liter 4.0 cylinder engine that develops 250 hp and 151 lb-ft of torque. It weights 2,758 lbs and is among the lightest sport coupes. It comes with automatic six speeds manual or automatic transmission, it depends on you. The price for Scion FR-S is 24,200 dollars.

The Hyundai Genesis 2.0T R-Spec is equipped with Torsen limited slip differential, summer tires and four piston Brembo brakes.  It is not as light as the Scion, though. It weights 3,399 lbs, but still its weight to power ratio (12.4 lbs per hp) is better than the one of the Scion FR-S (13.8 lbs).

As previously mentioned, the Scion FR-S is very light compared to other vehicles in this category. But, it is smaller, too. Being small and light for a car means performing good and save fuel. However, it also means that the comfort is not as good and the spaciousness is not as great as in other cars. Anyway, Scion FR-S, also known as Toyota GT86 is rather luxurious from the inside with seats adapted to the sporty behaviour of the car.

Scion`s rice is less 25k and for that you get nice sheet metal body, but you are deprived of spaciousness, particularly those sitting in the back. You are also deprived of technically advanced gadgets. However, this price will give you the ownership of the 2,758 lbs light Scion. And remember, less is more when talking about cars! 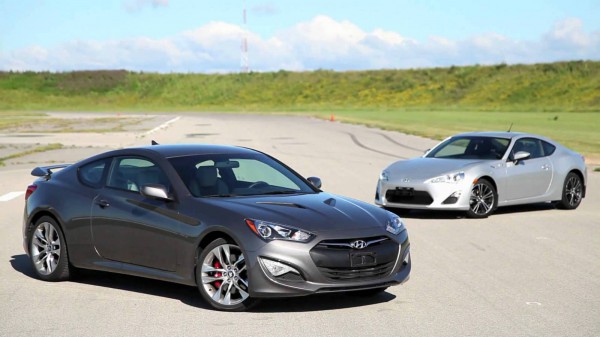 Both vehicles` abilities were checked in a 1.86 mile test track with 11 turns. The ride with Hyundai showed that Hyundai Genesis 2.0T speeds in few seconds and the speeding process is very fast, the drive is secure ant the car develops the 274 ponies on a straight track. Furthermore, the driver has rather high sitting position and the manual transmission of the Hyundai Genesis with 6 speeds may seem a bit complicated on first sight. Once you get used to it, you will understand that no force is necessary to change the speed, but just a small and delicate movement of the hand. 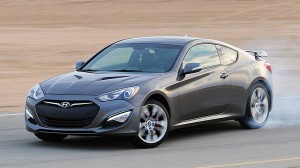 Even though, Hyundai Genesis R-Spec has big anti-sway bars firm shock dumping, solid springs and revised suspension, the car performance has disadvantages such as brake fade and understeer. These disadvantages result in overburdened tires. As far as the problem with the brakes, it turned out that after three turns, they completely faded and the driver was obliged to stop the car and wait until the brakes cool down.

Let`s go to the 2013 Scion drive now. When you sit on the seat, you immediately see the lower sitting position when compared to Hyundai Genesis. Furthermore, the ride with Scion is more pleasurable than expected. On the first turn it became obvious that the car has a surprisingly excellent steering performance. 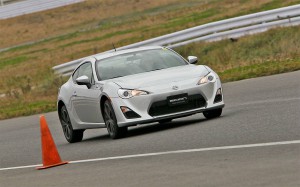 When you drive the Scion it becomes clear to you that it is a high- quality driving machine that offers balanced ride, smooth speeding process and sharp responsive system. The drive can be compared to the one of Lotus Elise with the price difference taken in consideration. The Scion is cheaper. So, for 24,200 dollars not only you will get a great ride, but you will be deprived of understeering problems or brake fade. You just might have minor difficulties with the 17-inch Michelin tires. Furthermore, when driving the Scion for the first few times you might become confused with the speed transmission due to the fact that the gearbox is not precise enough. However, these problems can be easily overcome having in mind that for example you can always have the tires changed.

If Hyundai Genesis and Scion were racing, than Hyundai would have been the absolute winner having a time of 1 minute 25.0 seconds as the quickest lap time. Other similar vehicles such for example Mazda speed3 and Honda Civic Si have 1:26.4 and 1:28.5 respectively. Other numeric data on Hyundai include longitudinal force between 0.8 and 0.9 g and 1 g lateral force with a peak of 1.08.