As much as we seriously love sports and muscle cars, every now and then we all need to have some chill out moments and let go by having fun, a bit differently than what we usually do. I guess that is how probably the guy on the video was thinking when he decided to have an `illegal powerwheels drag race` with his underage neighbor. They both appear in 2 red convertible Ford Mustang Electric, one powered by electric battery and the other is running on gas. 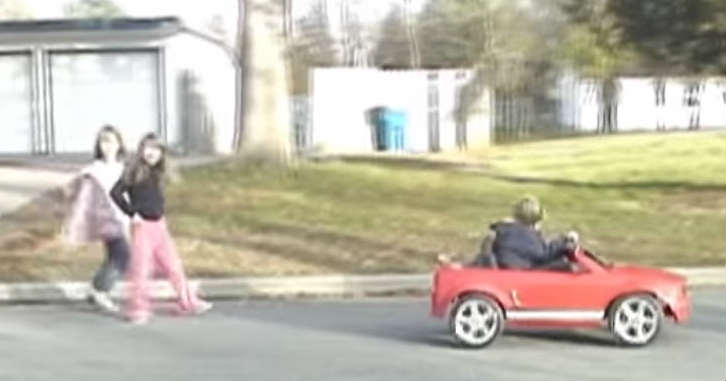 The stage was set for a clash between the gas powered Powerwheels Ford Mustang and the Ford Mustang electric toy car! The results of this race between the little cars caught us off guard we must admit! And as you will see, the gas powered Mustang, driven by our senior competitor is really something and the guy is taking things seriously, despite the age difference and all of the other factors going into his advantage. It is equipped with 110cc bike engine and it can do some serious `damage`. On top of the 110cc engine, it also has a 4 speed manual clutch and an electric start! This makes the race between the two little cars a little bit unfair, don`t you think?

After all, the Ford Mustang electric toy car was stock! Nonetheless, we still think this video was amazing. We got a laugh from watching it too! This is why you should check it out as well.

Having a little fun is always a good thing, right? Just watch that Mustang making a wheelie at the start of the race – it is probably the fastest gas running little car we have seen lately. Press play and witness the funny duel between two small cars!

PS: click here to watch one similar family adventure! We love it!