For generations the Ford has been a trusty car to literary anyone and some of its most recognizable models have been the Ford F250 pickup truck as well as the F100. 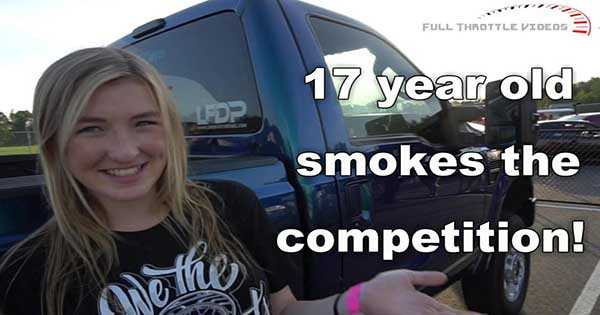 They marked the American history and, what is most important, even the future looks bright. In the following video we take a look at a young girl`s Ford F250 pickup truck while competing at an event. The Street Night No Prep, which is the name of the event, takes place in Middle Georgia Motorsports Park and various types of cars and trucks take part in it. So what makes this seventeen`s year old girl`s truck so special? Well, Chelsea Brooklyn`s truck has staggering 1,013 HP. But do not let her look fool you. She has been driving since she was 13!

This time she decided to compare her truck on the drag track with other competitors. This diesel monster looks absolutely stunning. She gets on the drag track and prepares for the race. Shortly after the race starts and she can be seen launching itself leaving behind huge clouds of black smoke. So you would think that she would not have any chance against those drag cars? Think twice! This Ford F250 pickup came as an underdog but managed to win several races. 3 wins after and she was finally stopped by a turbo Mustang. Not bad for a 17 year old girl. There is a dash cam camera mounted on the inside so you could see her too while racing!

Finally, check out these amazing gifts for kids!