Check out this amazing NEW VIDEO of a car with brake failure that entered the roadways as Trump‘s motorcade rolls by! 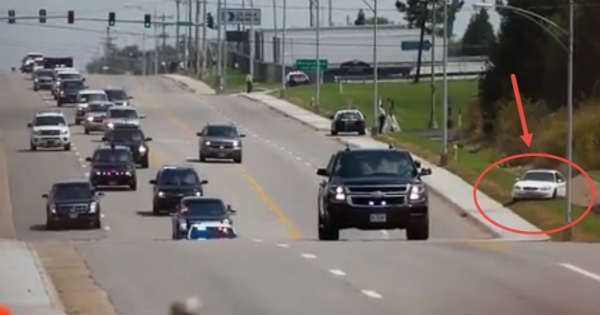 The name of the gentleman who recorded this video was Chris Robertson. He was actually inside his Kearney Street office and he was taking a video of the presidential convoy when something unexpected happened. A white car crosses a drainage ditch and almost entered the roadways as President Donald Trump‘s motorcade rolls by. The president Trump was coming back from the speech he had at a Springfield manufacturing plant.

Honestly this move it does look like a coincidence at all. When a vehicle comes out of nowhere like on the video, crosses a ditch and then appears to be headed for a President’s convoy you can not just say it’s nothing. The police have to react and they did. Attempting is a strong word in the US.

However the police spokeswoman informed about this incident. She said the white car ended up near the motorcade due to its brakes malfunctioned. Luckily motorcade wasn’t disrupted and no one was injured.