Moments after this skater stomped a very powerful Ollie trick, something very unusual and extraordinary happened. According to the guy who uploaded this video on instagram, the video was shot back in 2005. He states that the Ollie the skater completely stumped was done in his first try, which is pretty impressive. However, there`s way more to this video than a remarkable skater performing an Ollie. As the skater completes his remarkable Ollie which was greeted by huge ovations from the surrounding crowd, suddenly a Mazda rolls of the same ledge and crushes down into the ground. 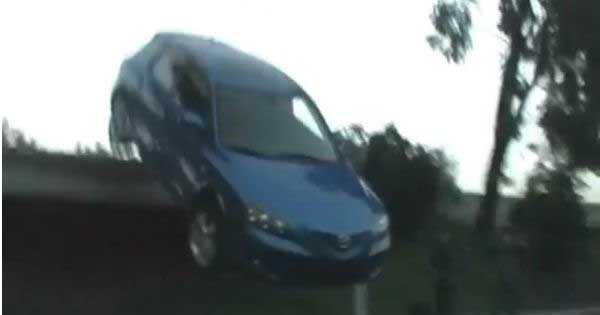 How did the Mazda manage to roll off a ledge like that? Well, obviously the Mazda was set in neutral and apparently it rolled off a towing truck. You can see the towing truck coming to the spot where the Mazda landed to pick it up again. The onlookers are pretty stunned by the incident and were laughing in tears. The entire incident is so insane that someone would think it`s all staged. However, we doubt anyone is going to destroy a perfectly good Mazda just for a funny video.

At last, read something more about skateboarding accidents!

Just found the raw footage of @zeredbassett I shot, illegally, in one take, in 2005, FIRST TRY! Happy Birthday Dr. Z! You are the true and original meaning of ‘cool’. (Wait for it. Sound on.)