The infamous Ice Vehicle in upstate NY was finally freed after being engulfed in ice for three days. The car`s owner Justin Yelen decided to park his vehicle in Hamburg`s Route 5 which is located in a very small town found south of Buffalo. However, when returned the next day he found his car entombed in ice. The car which is a Mitsubishi Lancer was parked right next to a lake that goes by the name of Lake Erie. It was already very cold when he parked the car next to the lake. However, the cold weather got even worse with winds up to 47 mph and waves from the lake poured out onto the streets. 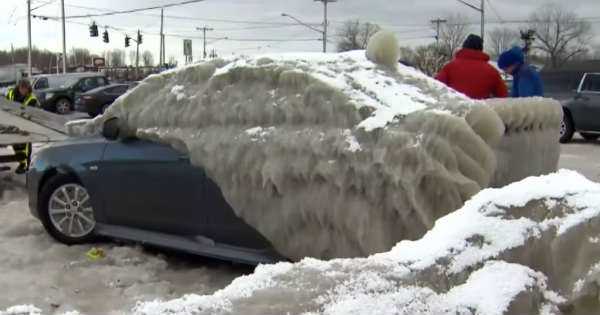 Temperatures got extremely cold overnight, which left Yelen with an ice car on Monday morning. In this video you can see shocking images of what looks more like a car on the movie “Frozen” than a car from this world. The infamous Ice Vehicle quickly managed to garner national media attention and went viral on the internet. However, after being entombed in ice for three days, Lake Erie Towing managed to dislodge the vehicle from its icy prison. Workers stated that it only took around 10 minutes to completely free the Lancer.

Some people on social media suggested using something exciting like a blowtorch. However, the work crew decided to use something way less exciting – calcium. This was a good call by the workers because even though calcium works like rock salt, it`s actually less corrosive. So they poured calcium around the wheel wells and tires before pulling the vehicle to freedom.

And last but not least, follow this link to find out how to unfreeze your frozen car lock!