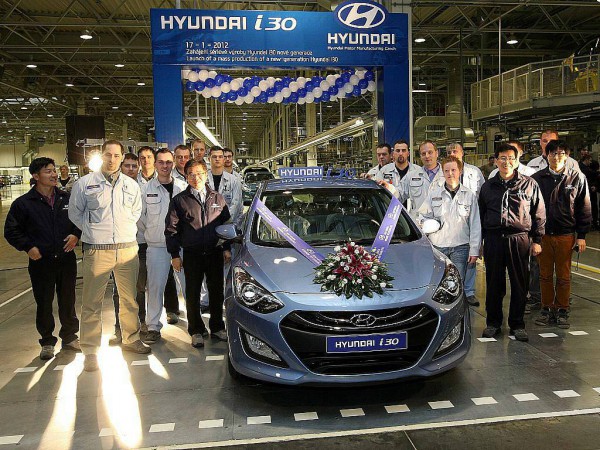 The Annual Turnover of HMMC is €3.2 billion! But guess how many of them were produced in this Czech Factory!

Hyundai produced 1,000,000 of the New Generation i30 at its manufacturing plant in Nošovice, Czech Republic since the start of the production November 3rd 2008. The model i30 was the first Hyundai car from the assembly line.

The annual turnover of Hyundai Motor Manufacturing Czech is €3.2 billion with combined annual salaries around €47 million. There are 3.500 people directly employed and another 7,000 employees at supplier companies. €1.3 billion is the worth of the ordered parts for Hyundai within Europe.

The ix35 and i30 the main Factors for Hyundai Market Share Growth up to 3.5% in Europe!

Senior Vice President at Hyundai Motor Europe, Allan Rushforth, said that Hyundai developed its business to become an “European” brand. Hyundai`s Czech factory is producing the 2 best-selling Hyundai regional models and producing 1 car per minute. The ix35 and i30 are the main factors why Hyundai achieved a record in the European market share of 3.5% in last year (2012).

The manufacturing plant HMMC, it secured the second position of the Czech Republic as the world`s 2nd largest carmaker per capita. This factory was awarded with the “National Award for Quality” after achieving the highest standards of quality.

The Hyundai ix20, ix35 and i30 are developed and designed at Hyundai`s “European Technical Centre” in Rüsselsheim, Germany.

Australia became the 60th destination for export for the i30 produced in the Czech Republic following the countries from Caribbean, Oceania, Eastern Europe and Africa. Together with the plant in Turkey the factory in Nosovize, produces 70% of the Hyundai cars sold in Europe.