People are constantly pulling on pranks on their friends and family and most of them are funny and we get a good laugh out of it, but these guys took a step forward to a whole new level and pulled a hilarious prank on their friend. 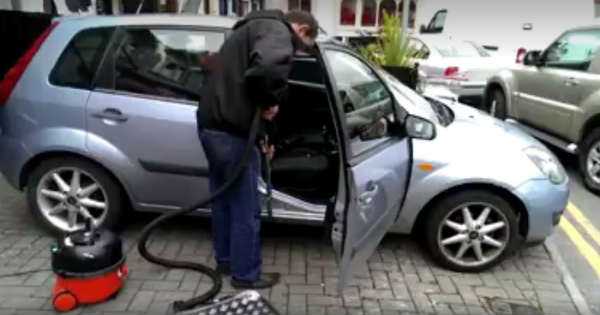 Of course that such prank has to be recorded because otherwise we would not be able to see them. Namely, this guy was cleaning his car with a vacuum cleaner; there is nothing strange about that. But then, one of his friends decided to take advantage from the situation. He pulled the hose out from the vacuum cleaner. The guy who was cleaning did not notice him and continued to do his job, or at least he thought so.

Once he “cleaned” the front of the car, he went on to do so at the back and everyone laughed hard at him but he simply could not understand why. To make this hilarious prank even better, he stepped over the hose several times. Everyone was in shock and wondering how he could not see what they have done. Several minutes after and he finally spotted that something was wrong and saw the vacuum cleaner being several feet away from him. Everyone had a good laugh at it, but unluckily, the man had to repeat what he did over again in order to get his car cleaned.

Check out the video for more and see how this hilarious prank looks like!

This prank is HILARIOUS!

Posted by FailArmy on Saturday, September 9, 2017