For some of us, cars like Land Rovers, Bentleys and expensive Benzes are Abandoned Luxury Cars. 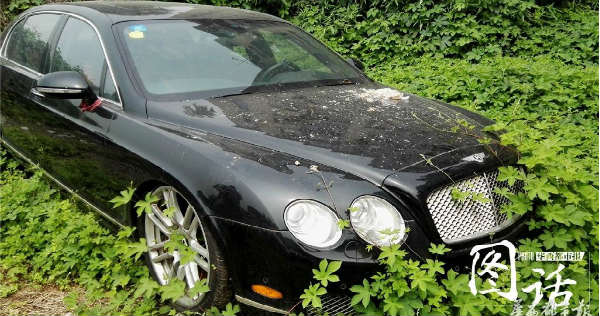 However, you may get startled when you see that over 200 luxury vehicles including the aforementioned brands were left to rust by their owners! You`ll see pictures of expensive abandoned luxury cars being taken over by bushes and weeds at an overgrown park in Chengdu, China!

According to Police, many of these luxury vehicles were connected to criminal cases! As we said, there are over 200 abandoned luxury cars which are called `zombie cars` by onlookers. The massive lot is called ‘tyrant’s car park’ as well!

A very logical title considering the value of all these luxury cars! There are two Bentleys, one a Bentley Flying Spur and another a Bentley Continental GT!

Just the two of these cost around $390,000 each! Some of these cars were abandoned in this lot for more than 2 years! Nature sure has taken its tool as trees and bushes have grown around them, disconnecting the vehicles from the outside world!

Besides the two Bentleys, there is also an expensive Mercedes Benz, Audi and a Land Rover! There is also one very peculiar motorcycle! However, majority of these vehicles are directly or indirectly connected to ongoing criminal cases! Meaning they can`t be claimed by owners! There are other vehicles that were ready to be scrapped.

But the owners didn`t have the correct paperwork so they just abandoned them in this overgrown park! All of these cars have become a real nuisance for the local authorities as they don`t know what to do with them!

Some of these abandoned luxury cars have been put to auction! However, others constantly arrive, piling up the graveyard of cars!