The internet features a massive and collective knowledge. However, you can`t find any information on who was the first brave gearhead to explode their tire onto its rim. Nevertheless, thanks to the power of YouTube we got hundredths of videos showcasing this silly and dangerous way to mount a tire. This idea has been spread far because even though it`s extremely dangerous, it actually works. You may ask, why is anyone doing an ether tire mounting explosion when you can simply do this with an air tank? 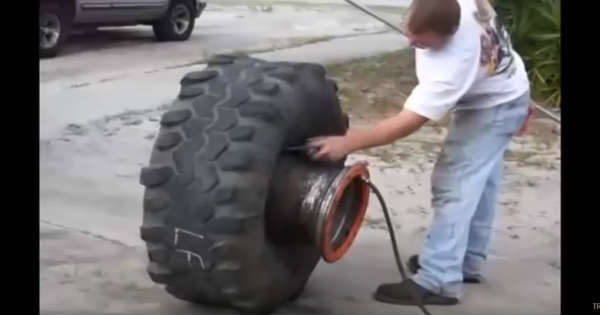 Well, someone`s excuse might be that they didn`t have that around. However, we think that is not an excuse.

Why is that not an excuse? Well, funny thing is, a lot of these videos are recorded in a shop or at home, so no excuse, really. The tire mounting explosion process is extremely dangerous because it can easily overinflate the tire which can result in a deadly explosion caused by the extreme tire pressure. Now, some guy on YouTube has gathered a lot of videos found on the internet and made the ultimate compilation regarding this process. Even though there are no casualties in this compilation, it doesn`t take much for tragedy to strike. So, we don`t advise you to attempt such a silly thing, use an air tank instead.

It might look fun, but it is quite dangerous, take a look at more examples!