I know it says Lotus Carlton in the video, but this is a Lotus Omega, which is the version of the car only sold in Sweden, which is this one. A guy driving one of them finds himself in a hurry, on a relatively empty highway, so he decides to put his foot on the gas and slam it hard until his car can`t accelerate anymore. However, this attracts the attention of the local police, who start following it in an unmarked Saab 9000 turbo, which does well at first but is then quickly left behind when the driver of the Omega decides he doesn`t have time to be getting pulled over right now. 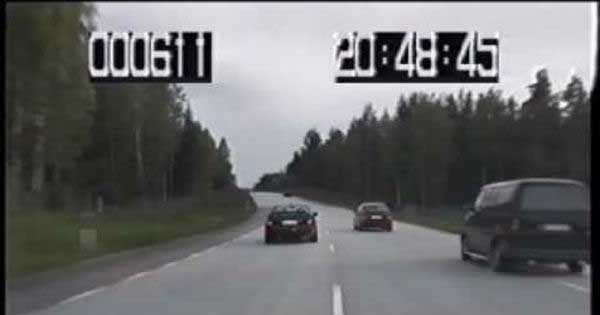 Either way, they both think they`re faster so they try racing for a while. What happens next is pretty much the expected – the guy in the Lotus Omega slams his foot down on the gas so hard that he can`t even be seen on the horizon anymore. Not that there is one, these roads all have curves that make you see only a few hundred feet in front of you at the time.

Anyway, the Lotus Omega just pulls up and as the cop car reaches about 200 kilometers per hour, it gives up the pursuit seeing as they can`t even locate the driver in the Lotus anymore. He just up and disappeared, vanished from sight as soon as he decided to not be pulled over. His engine was much stronger and it showed because nothing gets away that easy.

Finally, check out this chase between a loaded truck and the police!