This time we check out a story in which the president of the US met with the Harley Davidson executives. Despite being followed by many controversial stories, Donald Trump is still considered by many to be a great President and many people showed their support towards him. Recently two former US Presidents stated their disapproval of his politics too. But nothing would stop Donald Trump from fulfilling his goals. This time we see the short video by CNN in which he talks about the Harley Davidson bikes. 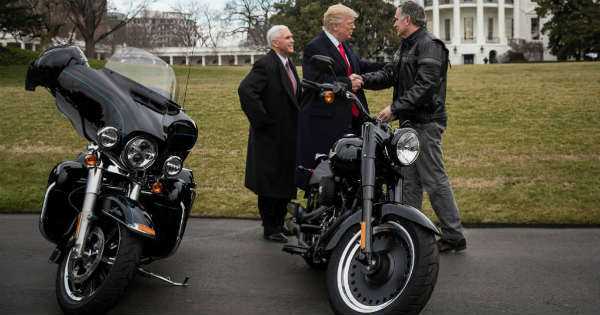 He met with the executives of the company on Thursday along with the vice president of the US, Mike Pence on the South Lawn of the White House. Though we do not have much details about this meet, we can surely conclude that both Trump and the Harley Davidson executives are talking about some future plans of the company. They also might be sharing some ideas on what goals the company should devote to improve, if it is possible, their current status. Furthermore you can check out couple of photographs from their meet while in front of them, five Harley Davidson bikes are parked.

Funny thing, when the group went back to the White House, the pool requested if he could ride one bike on which POTUS responded “Boy, would you like to see me fall off of one of those”. We can only assume what bike of those five there Donald Trump liked the most. What do you think, what were they talking about the whole time and did they manage to conclude something?

For more info about Harley Davidson’s latest products, check out their official website.