The massive damages caused by the recent hurricanes are still being calculated and there is a long way before everything is going to be repaired, but even the horrible hurricane had had no chance against these diesel trucks. As we all know the hurricanes destroyed everything on its way but these powerful trucks went against all odds and nothing could have stopped them. At the start of the video we take a look at this navy green diesel truck and its gigantic wheels. The whole area was flooded with over a meter of water but this truck managed still managed to drive due to its height. 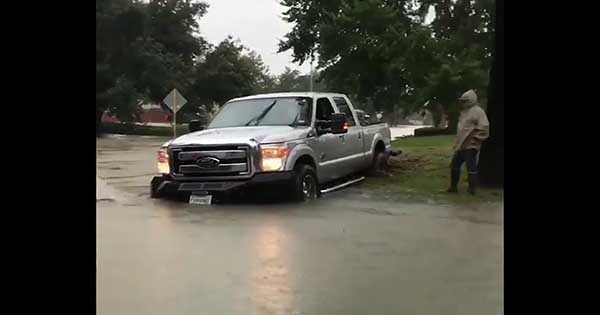 He was going super slowly and cautiously. But not everyone was that careful. In the next video we take a look at this white diesel truck which goes very fast while being in the water almost halfway. Despite the horrible hurricane and the floods, there were still some people with positive vibes and decided to take advantage of the water and go for a fun time with their inflatable boat. The boat was tied to a diesel engine with a rope and there were three men who were being pulled.

But the fun does not stop here! Behind these men there was another guy who was rafting while being pulled by the same truck. He drifts left and right and uses the small waves created by the diesel truck to have great fun. What do you think, which of these trucks is the most powerful one?