Check out how this Coyote survives getting stuck without serious injuries  in front of vehicle in Alberta, Canada! 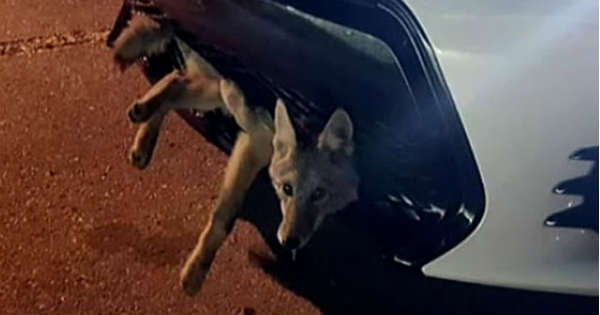 This woman driver was shocked at first because she thought she killed the coyote she hit on the road. So, as soon as she got out of the car she discovered this little guy is alive, but trapped in her vehicle’s front grill.

This lady, Georgie Knox hit this coyote last week with her Toyota SUV and she did not stop immediately. Actually someone told her that the coyote is sticking out of the SUV’s front grill. That happened after 30 kilometers (around 20 miles) after the crash, but obviously she was in shock because she thoughts this little coyote was already dead and left behind.

Anyway, we don’t think this situation is cruel because it can happen to any of us. At least this little guy was not hurt, so he was latter released and he run back in to the forest where he was living before. We are lovers of all animals, weather they are wild or domestic, they are all precious.

A video posted on Facebook by Georgie Knox shows the little guy being released back into the wild went viral and for now it has more than 30 million views.