Tug of war competitions are at the very heart of people who love watching cars doing anything and everything, and this match between a Chevrolet 3500 and a Ford F-350 is one of the best to prove it. 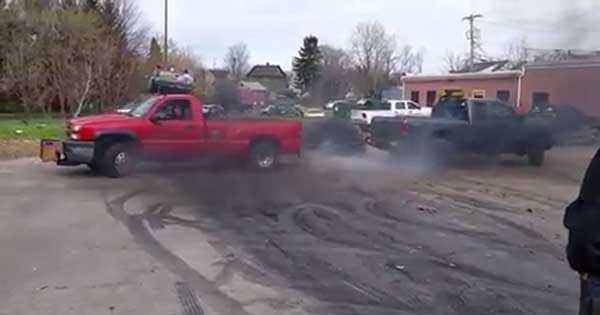 When you have two beasts like these in the same competition you can expect anything to happen, but in this video the winner is pretty clear. As both of them pull off and try to tug the other down, at first it seems like the Ford F-350 has the upper hand. The guy in the Ford is doing his best and there`s a lot of black smoke coming out of the Ford`s exhaust, but there`s a good reason for this – the Chevy driver is simply more powerful.

The guy in the Chevrolet 3500 proves his truck pulls better after a few seconds of quick deliberation. The winner is unclear but then the red dually pulls up and starts dragging the Ford F-350 around in a circle, and the match is over. The winner is the red Chevy 3500, and the guy was a real sport about it too – he didn`t drag the Ford driver and his vehicle around the parking lot just because he could, unlike other obnoxious winners in tug of war matches. Anyway, this match wasn`t even close for more than a few seconds – it got obvious right around the middle that the Chevy would dominate the rest. Even though the Ford was much bigger and heavier, it still couldn`t stand up to the Chevrolet 3500.

If that wasn`t enough, check out another mighty Tug of War!