When you first think of amazing jumps and stunts, the first thing that comes to your mind is probably those legendary stuntmen performing those jumps in front of thousands and thousands of people in the stands. But you would have probably never guessed that this amazing mini car jump was performed by a little boy who was brave enough to show his talent to everyone. Who knows, this just might be the way every successful stuntman began with, and if so this little boy has got a bright future in front of him. 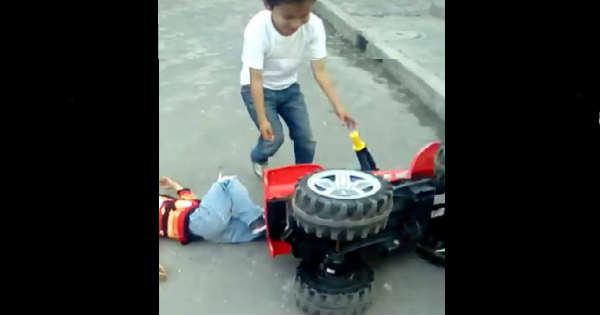 Namely, we see a short video of the jump itself. It is filmed on a small street and there are couple of cars parked hereby the boy has to be super careful in order not to collide in any of them.

The ramp is simply made out of plywood and couple of bricks. It seems to all of us that this ramp simply could not withstand the force from the impact, but we are wrong. Then we see the small boy being pushed down the street by a friend and just as he reaches the ramp, he manages to keep control while being in the air thus complete this mini car jump. There are dozens of children who are watching from the sides and they are all very excited. Though the boy ended up on the ground and falling out of his bike, he seems to be just fine. Age is no limit and you can always do what you desire the most!