Boy do we love the rare and unique hypercars. People grab hold of them for millions of dollars and are not willing to sell them for anything. However, one Koenigsegg CCXR Trevita has been set up for auction, but who would do that? 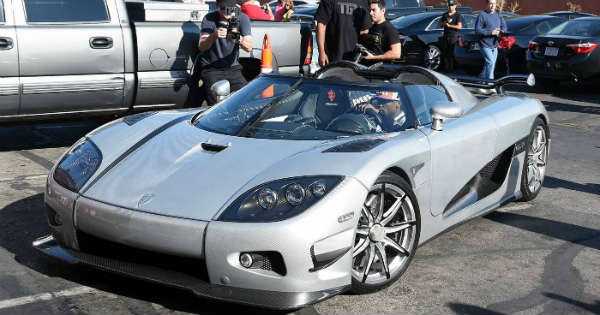 We all knew that only two of these Swedish monsters were ever built with only one being legal to drive in the US. That man is Floyd Mayweather. These you probably see him all over the news because of the upcoming boxing match with Conor McGregor. But he had something else in mind. His hypercar collection is so big that he has to make room for others by selling some of his current beasts. This time he decided to sell the Koenigsegg CCXR Trevita, which he purchased it for $4.8 million.

The name “Trevita” when translated into Swedish it means “three whites”. This is a reference to the cars` bodywork made from carbon-fiber and diamond weave. With its twin-supercharged 4.8 liter V8 engine the Koenigsegg CCXR Trevita is capable of producing up to 1,018 HP. It has its own Xtract Super Synchro 6 speed paddle-shift transmission.

It goes from 0 to 60 in just 2.9 seconds with top speed of over 250 MPH. What makes this 7-year-old supercar even better is the fact that it had been driven for only 1,947 miles. The auction will take place in Monterey from August 16th to 19th. Who knows for how many millions of dollars this car is going to be sold!

At last, check out the top 10 Koenigsegg cars of all-time.