The 2018 Lamborghini Urus shares the same underpinnings with the Bentayga, Audi Q7 and the Cayenne, but it seems like its way more aggressive than all those three. For some reason, Lamborghini decided to remove this teaser from YouTube and re-upload it without Urus` infotainment`s display. Oh well, too late. Someone already download it and uploaded it on YouTube so you can watch the teaser below. Judging by the infotainment`s touchscreen, Lamborghini`s SUV has a pretty aggressive front fascia. Having said this, it does not look like a typical SUV at all. It also features a notable front splitter, bulging wheel arches, and massive air vents. 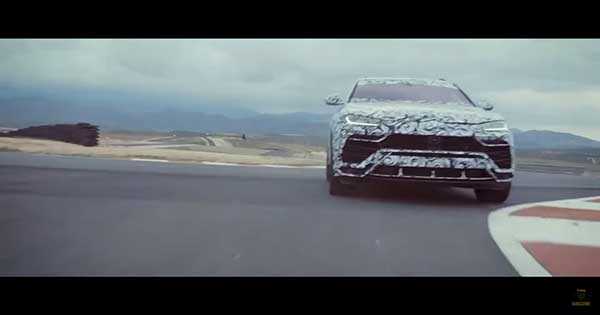 All of these ingredients allow this car to distinguish itself from other SUVs. Nevertheless, the Urus has a lot more to offer. This teaser of the 2018 Lamborghini Urus gives us the chance to take a glimpse at the Bang & Olufsen speaker. However, on top of this, we also get to see the all-digital instrument cluster which is the Corsa mode. The name Corsa is translated “race” in Italian. It`s a mode which is derived from the Aventador and Huracan, pretty exciting, right?

In addition, you can also easily notice a secondary touchscreen panel which can be found on console mounted in the center. Here you can find the HVAC controls which are similarly done in the A8 and A7 Audis. There are also rumors that a fairly similar setup will be installed in the upcoming Q8. The new Lambo Urus should be released in a couple of days in Sant`Agata Bolognese. From previous teasers we have seen Urus` other driving models like Neve, Terra and Sabia.

At last, take a good look at this marvelous Lamborghini Aventador LP700-4!