This 70 Chevrolet Chevelle seems to contains all the qualities of a hot rod that Mike Watts ever wanted in a car. Teaming up with Chris Fesler Productions craft shop, they built a perfectly detailed beast with a pair of duffel bags, swimming with C-notes. Fesler and Mike have been cooperating for years. Fesler did Mike`s `55 Chevy on Art Morrison Frame with all the necessary Pro Touring details. Mike also owns a `57 Chevy. You don`t have to be genius to see that he`s a true car fan, a dedicated automobile collector.

So, as the story usually goes, the `70 SS plan started as a basic daily driver, with just few corrections needed. It was not what Felser thought. The car was wrecked and in a terrible state and there were part that were not quite fit the design. So, the team started afresh.

As Fesler said: Mike wanted something that was never done before. So the first ones that needed freshen up were the bumpers. They were perfected with a special finish. This was done to every piece of metal in the car. Everything was copper and nickel plated, then brushed and cleansed  so that in the end everything looked as amazingly as it does.

It`s a smooth a quiet companion down the road, with a leather and suede interior.

Felser`s team did a conversion from oil to a wet-sump system, carefully adhering the to the electronic cube in a way that this powerplant was developed. The insides of the machine were left untouched, as they focused on the support systems. The Corvette stuff was replaced with MSD primary wires. The GM Performance Parts pump and filter were used as a basis to built a fuel supply system. Felser also built the air intake tract. The boys chose a Street & Performance accessory drive system as the ultimate in packaging. The exhaust system was built from stainless steel. Felser also built custom –bent MagnaFlow mufflers, head pipes and tailpipes. The recipient is a Currie 9 with 4.11:1 cogs and 31-spline axles.

Mike`s 7 Chevrolet Chevelle combo includes FS907 model, three-piece assemblies, 19×9 in front and 19×11 at the rear end. The Goodyear Eagle F1 grabbers are 245/35 and 295/30. The Baer 6S brakes rapidly fire up the 15-inch rotors. There is also a Hydratech booster, proportioning valve abd a SSBC master cylinder.

The Felser team removed the antenna and the marker lights and installed the bumpers. This mean-looking beast has adapted door handles, 5-inch headlights, LED surrounds and taillights

Despite its mean-looking exterior, this Shellby has an elegant interior. Felser created a hadmade steel dash, containing all the necessary up to date gadgets such as: Nav Radio/DVD, modern controls and gauges and window switches. Fesler leathered up the Recaros and lined the headliner in suede, supplied the seatbelts, laid down the Bentley carpet, made the side panels and the doors, painting everything in black. The steel dash holds Auto Meter gauges. There is also a Fesler-grown steering wheel. Inner door pulls as well as hood and trunk hinges are also fitted. The AVIC –F900BT head contains DVD, CD, iPod, a navigation system, a corresponding monitor and a Sirus satellite. There is also DEI Viper alarm system.

From the very begging this complete 70 Chevrolet Chevelle project was a total make over, so the Felser guys smoothed everything out. The RideTech wasn`t included in the building process. The team started with dropped spindles, ShockWaves hard-lined 450C Viair compressors and Accuair holding tanks, altogether with tubular control arms. There is an Air Bar four;link setup.

At last, read something about this terrifying crash! 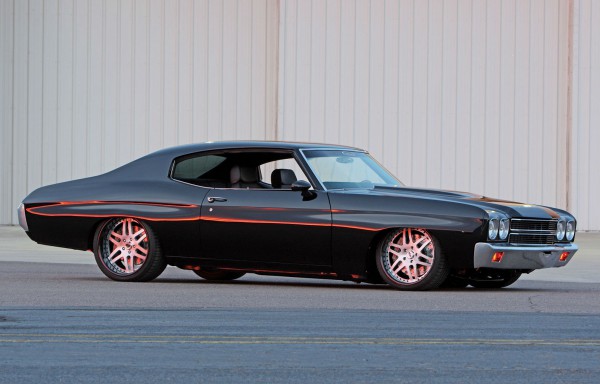 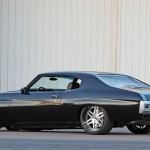 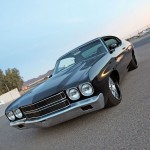 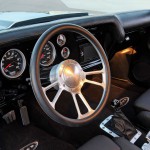 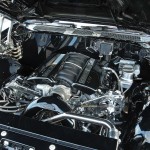