Anchorage, Alaska is the place that has deserved our attention as it is the epicenter of events related to a 1969 Camaro RS SS that has been untouched for 28 years! This video, among many, should be the one to finally explain what people mean under the expression: “Things don`t work the way they used to!” So, this classy charmer was found in a backyard in Alaska after so many years! The plates had expired in 1984 as few modifications have been done to this superb vehicle. Of course, the car is now a project and allegedly, it has a 327 engine in it. 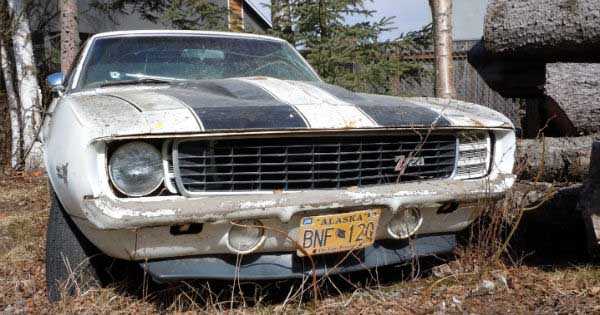 The engine was swapped from the original Big Block Chevy/4 speed engine in the early 80s. The previous owner did other modifications to the car as well. Some worth mentioning are the amazing crane gold ratio rockers and some dual valve springs. Moreover, the car was additionally equipped with some hardened pushrods and 650 double pumper and we believe that`s not all!

However, we can see that old muscles such as this 1969 Camaro RS SS don`t need much! Even though almost 3 decades have passed, all the Chevy beast needed was a couple of guys that know their thing and know how to work! This charming car has a Z28 badge which should not confuse you as this car used to be Yellow Daytona before it turned white. The Budweiser sign on the spoiler gets you in touch with the 70s even more! Enough talk, enjoy the video!

Anyway, here are some tips on how to start a stored engine!