When perusing the Early Ford V-8 Foundation and Museum, these two guys find the Museum`s best piece – a stainless steel Ford from 1936, restored to perfection and gleaming with awesomeness. This car was given as a loan to the Museum by some folks in South Dakota who collect 1936 Fords, and that`s not all – there were only six of these ever made! It`s a 1936 Tudor Deluxe touring sedan, model 68-700, to be more specific, and it looks like a car that would captivate the minds and souls of all those who laid eyes upon it. 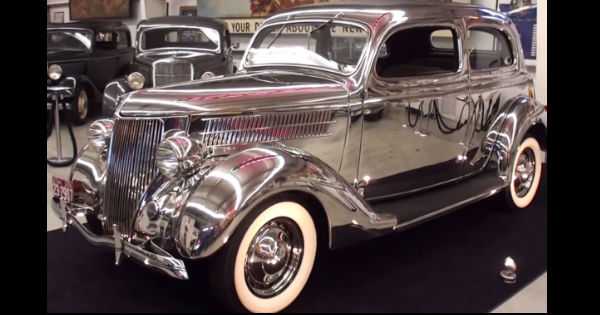 The stainless steel isn`t what you`d call tastefully done, but it still looks really good, especially because of its mirror finish which doesn`t seem to be the original way the car was, but it`s still good. This stainless steel Ford and the five others were built for the Allegheny-Ludlam steel company and would serve as a rolling billboard for the company – each of the six area managers would drive one. It`s rumored that the factory machines that stamped out the parts for this beautiful finish were thrown away after that because they were useless, having degraded from the work with the harder stainless steel.

These cars have about 200 thousand miles on them, so they aren`t new, having ran daily from 1936 to 1946. However, only four of these persist, so the chance of buying one is really, really low. The inside of the car is equally impressive because they reflect on the best cars of that time. Check out the video for more!

Another cool Ford`s model is the 48! Read more about it!