There are young talents among us such as the 18 year old Alex Taylor who are awesome at everything related to cars.
Ms. Taylor rolled out her twin turbo Camaro and ran an astounding 8.94 in it, at over 157 miles per hour! She pulls up to the line, revs up her white striped beast and as the smoke starts to engulf the entire area, she pulls ahead and slams her foot on the gas pedal. The result is astonishing – her beast roars with great might and pulls forward like it wants to superglue her to the seat. Soon after that, it`s clear – she did an awesome run and the announcer yells it out on the loud speaker with glee – that sure was an incredible experience. 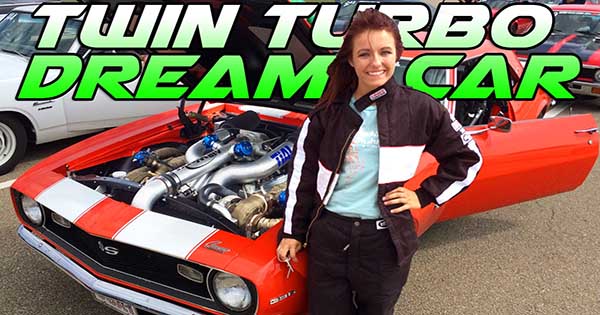 After the pull, this video depicts Alex Taylor trying to fix a problem under her hood, and they spend the next few minutes watching her work on her twin turbo Camaro. It`s quite impressive to see such young talent in drag racing and I sure hope to see more of her in the coming years.

Ms. Taylor is well on her way of becoming a sensation since this video, and after fixing what she thought was an exhaust leak that caused her a bit of power-loss in this pull, she got her twin turbo Camaro ready for the races the following day. It`s wonderful how these things Chevy made all the way back in 1968 can survive and become superior to modern cars with enough care and just the right touch!

Finally, here are the best drag racing girls in one gallery!