Over the course of this last decade we have seen some amazing videos of people performing some amazing stunts, most of which were heroic enough to save someone else`s lives. This is the reason why we take a look at the following video in which truck driver does one of the most impossible truck save you have ever seen! That is why being a driver takes great responsibility and having a good reflex could sometimes save your life. The situation is the following. 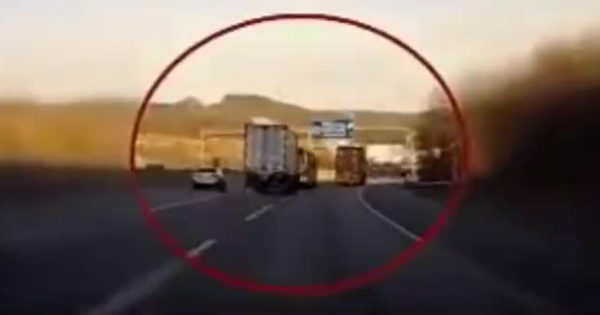 We see couple of trucks and cars driving on the highway and there is nothing wrong here. Then, all of a sudden due to the sign on the highway, this truck driver turns his truck towards the right side and manages to avoid hitting the big sign.

But why would he do that? Well, there must have been a height limitation on the sign that will inform drivers whether it is safe to drive under it. When this truck driver took a glimpse at it, he immediately realized that it would be impossible to go under it. But this sharp turn right caused his truck to lean towards the side and literary drive on two wheels.

He managed to balance the truck and eventually all four wheels touched the ground. He performed one of the most impossible save we have ever same and at the same time, not injuring or causing trouble to anyone. What do you think, how brave was his reaction and what could have happened if he had hit the sign?