Hyundai Motor America had dominating performance at the 2013 Pikes Peak International Hill Climb. With the RMR Genesis Coupe Racer this week in Colorado set a new Time Atack Class world record. Paul Dallenbach passed the track of 14,115-foot in 9:46:001. Actually he improved the record of Rhys Millen from last year.

Dallenbach said some specific adjustments were made to the racing car in order to improve the handling balance.
Next day Rhys Millen came back to Pikes Peak and set a new personal record time: 9:02.102 in the new unlimited-class, where he competed with production based Lambda engine block, powertrain support equipment as well as heads. The production Hyundai The Sonata`s electronic power steering very well at high and low speeds and provided excellent  feedback. 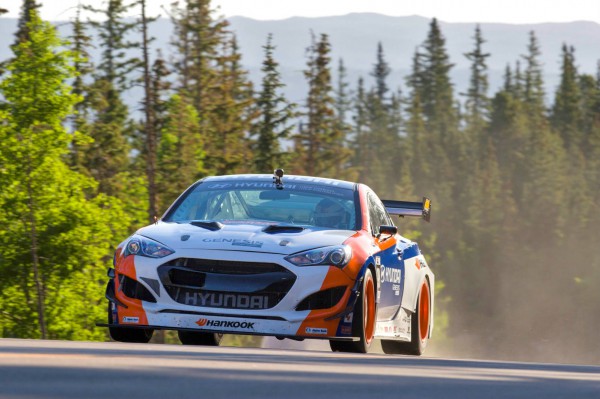 Rhys said team made precise adjustments in the Hyundai Genesis PM580-T after the last years` world record with better downforce and the traction for our rear-drive strategy for the all-tarmac track.

Hyundai Motor Company is expanding its motorsport performances in the newly  established centers in Alzenau and on the Nurburgring in Germany, with the special goal on the i20 WRC rally car for competition in the FIA WRC in 2014.

On Board Video with Rhys Millen at 2013 Pikes Peak!