There are many things we can learn from elderly people and hereby we must accept and appreciate their opinion and advice. Even though things have changed ever since their youth, they still have some ace hidden in their sleeve. Namely, we check out this amazing video in which an elderly man taught these boys a valuable lesson they will never forget and showed them how they used to do it the classic way back in the days. We can see this Corvette driver having a GoPro mounted on his head and is capturing all the action as they have some fun time on the road. 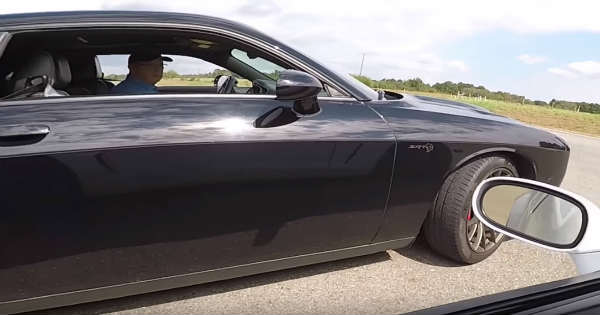 But then, they come across a furious and extremely powerful Hellcat that was driven by an elderly man. They wanted to test him and his limits. Little did they know that this man had something to show them, rather than they. Just as they tried to pass him and push the Corvette to the limit, the Hellcat was seen simply flying besides and in front of them, leaving them no chance to feel the win. What do you think the Corvette driver was thinking?

Even though they are excited, they must admit that sometimes the classic way is what me must appreciated and respected no matter how different the situation might seem at first. Soon after, they make a stop nearby and have a short conversation about their awesome cars.

Even though the man was deep in his 60s, he still had the need for power and speed. What do you think about it?