Drag races have always been our favorite type of racing! Whenever we stumble upon a good drag race, you can be sure it will end up on this website! Check out this awesome drag race between the Nissan GTR vs SUZUKI GSX R 1000 vs YAMAHA R1! It is not common for a bike and a car to race each other. These guys however decided to give it a go! They met at a highway which looks like it was made for drag racing! After making sure that no one would interrupt their battle, everyone got to their starting spot. It was the black Nissan GTR in the middle lane, the Suzuki GSX R1000 in the left lane and the Yamaha R1 in the right lane. 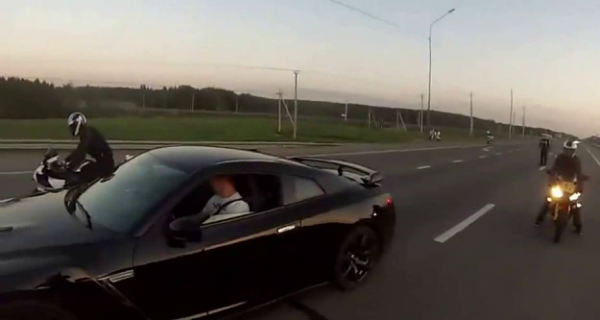 With the stage being set, and the camera on the Suzuki GSX rider filming, the race was ready to start! The start of this race has got to be one of the best race starts we have ever seen! As soon as the signal was given, the Nissan GTR stormed off to the leading position! The Yamaha R1 had a solid start as well, but it was soon passed by the Suzuki GSX R 1000!

This left the Suzuki with the duty of trying to pass the compatriot sports car! It slowly began to close in on the Nissan GTR, but as soon as it reached its rear, the show ended! The Nissan GTR accelerated to incredible speed and it was gone in a matter of seconds! We are just curious about one thing. If the Suzuki GSX R1000 was so far behind the Nissan GTR, how far was the Yamaha R1? Nonetheless, this is one AMAZING drag race that you shouldn`t miss! Press that play button and enjoy the show!