There are tons of awesome stories we have previously heard of people becoming heroes over the night. These stories always manage to amaze us and hereby we check out something similar i.e. a vintage story of a Fire Engine Porsche 911 that managed to save the life of Niki Lauda that got serious injuries in a crash while racing in the German Grand Prix of 1976. But all of you must be wondering how such Porsche 911 can bravely save a life. Well, this was not your ordinary Porsche i.e. it was actually a fire engine Porsche 911 that was supposed to be used as a fast way to extinguish a potential fire anywhere on the track. 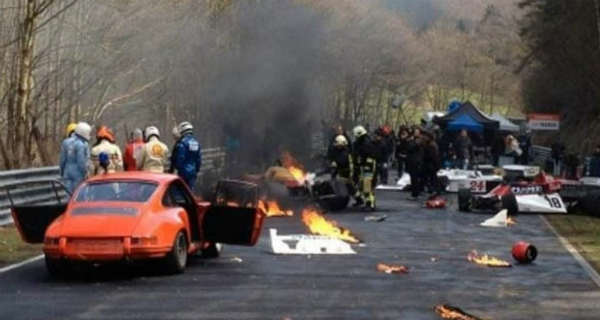 And so it actually happened when Austrian Ferrari driver Niki Lauda crashed at the ruthless Bergwerk turn. In the gallery below you can see how the crash looked like and see his car being up in flames. He suffered severe burns to his head as well as a toxic damage to his lungs that put him into coma.

Luckily, the fire engine Porsche 911 came in at the spot immediately, took out the hose from the back and extinguished the fire. This horrible event also put an end to an era as the fearsome Nordschleife was doomed for end. It was banned immediately after and that corner was marked as one of the most dangerous turns on a track ever.

What do you think, what would have been if there had not been for the brave Porsche 911?