We have seen numerous videos of people doing some impossible stunts, but it seems that nothing can beat this insane parachute jump of a group of Navy SEALS who jump into a football stadium. This SEALS team is called the Leap Frogs and their goal was to jump into the Neyland Stadium in order to kick off the football game of the Orange vs. the White UT Vols, which was a part of the Knoxville Navy Week. What makes this insane parachute jump so unique and thrilling is the fact that there is a GoPro camera mounted on one of the crew members which makes you experience the jump from a 1st person. 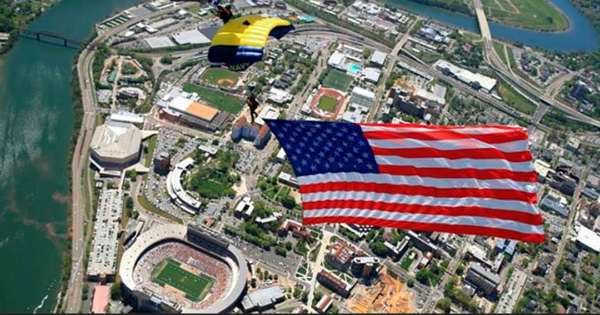 They can be seen preparing for the jump and when everything is set and they are at the desired height and spot, it is show time!

First who jumps off is the man with the red smoke marker. This is done so that he could help guide the rest of the crew due to his high visibility. The weather is nice and sunny which makes the stunt look that much cooler. They are slowly and safely decreasing in height and the man filming check if everyone is fine and whether they are going to land at the precise spot.

After a nearly 4 minutes of gliding through the air, they finally landed on the stadium nice and safe. Everyone is cheering and gives a round of applause for this awesome stunt.

What do you think; would you ever try this insane parachute jump?

For more details about this extreme activity, check out this link.