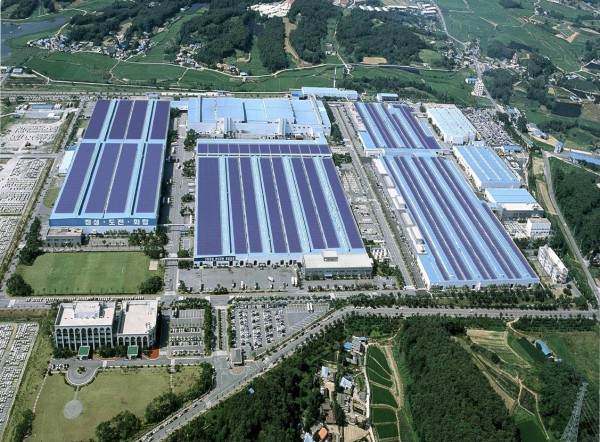 Hyundai Motor Company will install the South Korea`s largest rooftop photovoltaic power plant at its car manufacturing plant in Asan in order to increase the use of renewable energy and to help the global warming problem. Hyundai`s Asan will host the new power plant, while KEPCO (Korea Electric Power Corporation) will be purchasing the electricity produced by the new solar modules and re-sell it to the local areas near the manufacturing plant, including the nearest Asan city.

Working with the thermal power company KOMIPO (Korea Midland Power Co., Ltd.), Hyundai will install more than 40,000 solar “photovoltaic” modules on the rooftops of Asan`s welding, press, assembly as well as engine buildings by the end of 2013.

The 213,000 m2 area will be equipped with the new modules accounts with more than 68 % of the roof space,  the combined modules peak capacity reaches 10 MW and the completed plant will be supplying up to 11.5 M KWh of electricity annually (equal to supply of electricity for 3,200 households).

100 % of the photovoltaic plant will be built on the existing rooftops. The Asan plant produces the eco-friendly Hyundai Sonata Hybrid, Sonata and Grandeur/Azera.

In order to produce the same amount of electricity (11.5 million KWh), the thermoelectric power manufacturing plant releases 5,600 tons of CO2. This emission can be prevented by the use of the new photovoltaic power plant. This reduction of 5,600 tons of CO2 emissions is equivalent to planting of 1,120,000 pine trees.

At the other hand, the sprinkler that cools down the solar modules will help the plant to save energy by lowering of the interior temperature during the summer.