Trucking is an American way of life. How else can we transport goods and freight across this vast country, safely? However, autonomous, driverless vehicles are now being trialed and there is talk that it will revolutionize the trucking industry. And it’s not just trucks that are changing. It’s cabs and cars too, even Uber have been investing in autonomous driving technology. A huge 85% of Americans own a car -- but can you imagine an America where no one actually drives them? 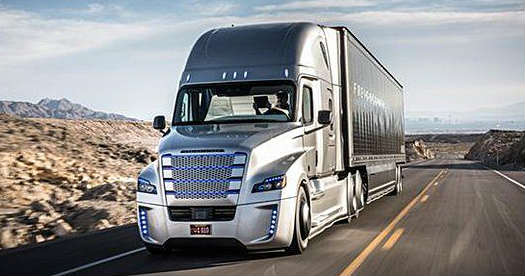 How do driverless vehicles work? Long-distance 18-wheelers are fitted with robotic feet over the accelerator and brake pedals that can be operated remotely. There is a motor fitted underneath the steering wheel that steers the vehicle. On the outside of the trucks are radars and cameras to help steer the vehicles. This can be done by humans in towns and cities where there is traffic and congestion. Once the trucks move onto the open highways, the driving is taken over by the automated system. It’s like giant radio controlled trucks, but on a much bigger level.Changes to truckingThe trucking industry is changing too and moving forward with the times. The speed and accuracy of deliveries is extremely important to customers, and the truckers are keeping up with this. Harry Hover, Paul Svindland and Bill Busbice invented an app, HWY Pro, to speed up the loading and dispatching of goods as the invoicing can be done on smartphones. All of the peripheral activities have been moved on to make it quicker at the start and finish of a journey. The 10 billion tons of freight in America are moved efficiently and safely.

Truckers don’t just deliver goods across the states. They have to deal with customers and clients. Truckers are a valued go-between. They are not just drivers, but the custodians of freight. If there’s a problem on the road, they deal with it. If there’s difficulty finding shipment invoices or paperwork when they reach their destination, it’s the drivers that sort out problems. Autonomous drivers are simply not capable of the level of social interaction that is needed. Long haul truckers are well paid and extremely sought after for their driving experience. Technology is moving forward, but a self-driving truck can never replace a trucker who loves the job, loves the vehicles and loves the open road.