We all love taking a look inside celebrities` garages and their car collection, and very often most of them like to show off their cars and invite journalists to review them, but in the following video we check out Cristiano Ronaldo car collection in a neat compilation of his 6 best cars. 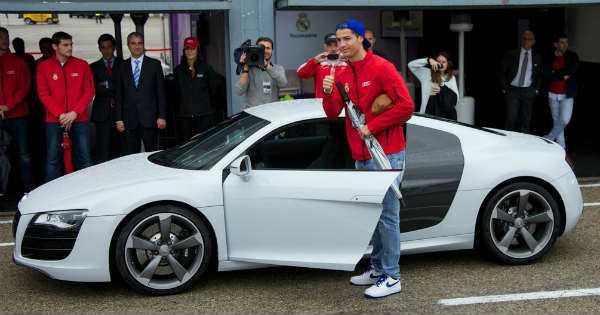 He is one of the greatest footballers to have ever played that sport and he is also a true car lover. His refined taste enabled him to purchase and own some of the best cars out there, as well as some of the most expensive. To begin with, the first car on the list is the Porsche 911 Carrera 2S Cabriolet. This blue monster cost Ronaldo exactly $101,000 in cash which is a decent car to begin our list with.

Going further down and on number 5 we check out his Maserati Gran Cabrio. This beast cost Ronaldo as much as $140,000. A car collection would not be a car collection if there was not Bentley in it. Ronaldo owns the Continental GTC which he purchased it for $195,000. As we approach our top 3 cars, we take a look at his Lamborghini Aventador LP 700-4 and it cost him $318,000. Second on the list is the Ferrari 599 GTO which he bought it for $385,000. But the car he can be most proud of is none other than the Bugatti Veyron which cost him whooping $1.7 million.

Cristiano Ronaldo car collection looks absolutely stunning so make sure to check out the video below!

At last, check out the massive car collection of Bill Gates.